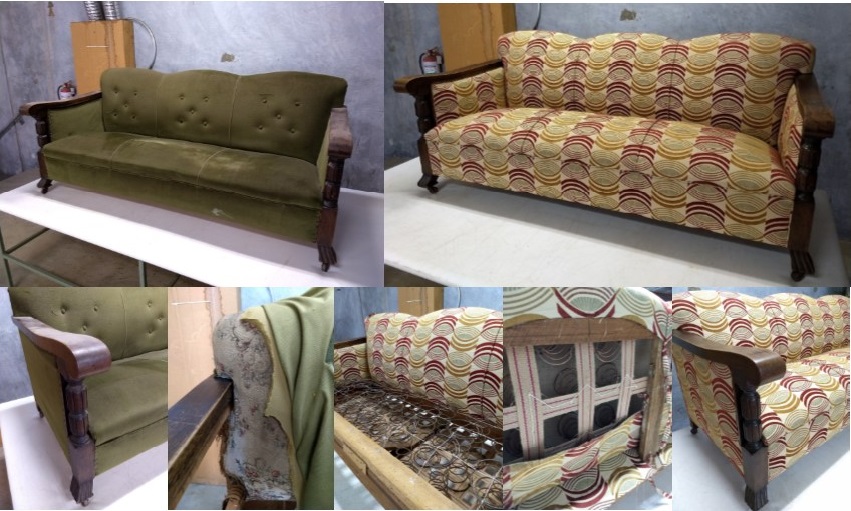 This classic three seater couch was manufactured in 1948 by Hicks Furniture in Kalgoorlie Western Australia. Some classic furniture was made in major regional centres from the late-19th century through to the mid-20th century. This was due to the problems associated with long distance transport of bulky fragile items and the fact that many skilled trades people from all walks of life migrated to these areas during the preceding gold rushes. However the other important factor is that the demand existed during this time frame for quality furniture.

This couch was purchased by its current owner who is now 93 years of age when he was married at the age of 24 as a present for his wife. It is interesting that it was re-upholstered in the 1970’s; note the original sprung edge was replaced with timber rails and the initial upholstery fabric was a tapestry then it was re-upholstered in an olive velvet. The upholstery business who effected this was a well-known operator however simply replacing a sprung edge with timber and placing the new fabric over the old sandwiched with a layer of foam can only be described as shoddy workmanship.

We stripped the existing upholstery back to the frame then carefully knocked the joints apart, glued then clamped and screwed the frame where necessary. Our client wanted to retain the history of this piece so we simply cleaned up the show-wood timber, touched up the chips with an oak stain then used a quality furniture polish to bring back the shine. The frame was then webbed and re-sprung mainly using traditional upholstery methods with an art-deco fabric. The result is that a classic Australian made couch has been given a new lease of life for future generations to enjoy.

The settees and ottomans arrived in good condition. They are excellent. Marnie and I indulged in their comfort last evening and agreed we owe you a vote of thanks for your craftsmanship. Thank you and well done.
Derrick and Marnie
Mt Barker
I apologise for being so tardy in telling you how thrilled we are with the newly covered couch and the two arm chairs. They are perfect and we just love them. I have to keep the grandchildren off them when we visit the vineyard. Many thanks again.
Jane
Dalkeith WA
One word – STUNNING! Thank you very much, I shall sing your praises to all and sundry. I sat in it and I love it – I shall be reading a book whilst reclining on it this weekend. I am so glad I decided to go the way I did and re-cover rather than buy some Chinese junk.
Bev
Bayswater WA