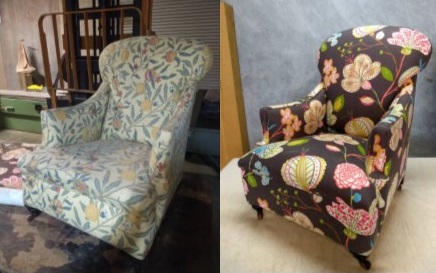 A client approached us saying they had a ‘Mackintosh’ chair in desperate need of re-upholstery. They had purchased this lounge chair in the UK in the 1970’s and it had just been re-upholstered, they were told it was made about 1910 and was a Charles Rennie Mackintosh (1868 – 1928) design reflecting the ‘Arts and Craft’ period.

Charles Rennie Mackintosh was a Scottish architect and designer who played an important role in the turn of the century ‘Arts and Craft’ movement. He became interested in architecture at a young age and enrolled into the Glasgow School of Art at fifteen meeting the McNair children (marring one of the sisters). The foursome collaborated becoming renowned for their refined stylization of furniture. In 1889 Mackintosh became an apprentice at the architectural firm Honeyman Kreppie and was made a partner in 1901. He demonstrated a break from traditional Victorian design being influenced by Japanese and Celtic art. He was famously commissioned by Catherine Cranston to design the Willow Tearooms (Glasgow) interiors and furniture for which he developed the famous Argyle chair.

We completely stripped the upholstery to the frame on this chair and judging from the construction techniques it coincides with the period. The chair was then re-sprung and completely re-upholstered being covered in a linen supplied by our clients.

There is however something extremely strange regarding this chair? The construction techniques coincide with the with the ‘Arts and Craft’ period and the design coincides with the Mackintosh style of the period however from our research he never designed a fully upholstered lounge chair, only dining and occasional chairs with a few show-wood framed lounge chairs. Our client loved their rejuvenated chair and the mystery remains!

The settees and ottomans arrived in good condition. They are excellent. Marnie and I indulged in their comfort last evening and agreed we owe you a vote of thanks for your craftsmanship. Thank you and well done.
Derrick and Marnie
Mt Barker
One word – STUNNING! Thank you very much, I shall sing your praises to all and sundry. I sat in it and I love it – I shall be reading a book whilst reclining on it this weekend. I am so glad I decided to go the way I did and re-cover rather than buy some Chinese junk.
Bev
Bayswater WA
This thank you is well over-due but we sincerely wanted to thank you for the beautiful furniture that you made for us.” “Every night when we sit down “to relax, it is an absolute joy.” “You are a true craftsman.”
Heather and Richard
Mt Pleasant WA.