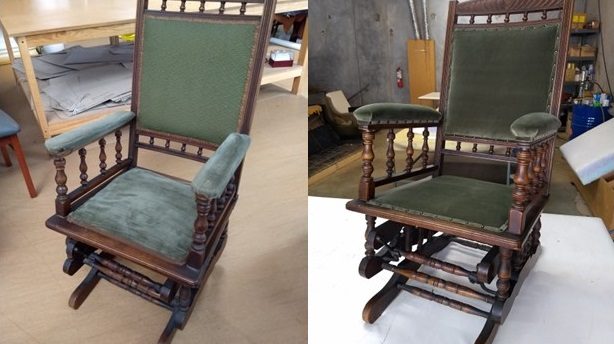 Mechanical rocker/glider chairs or platform rocker chairs are a type of rocking chair which moves as a swing seat, where the entire frame of the seat is attached to the base by means of a double rocker four bar linkage. The non-parallel suspension arms of the linkage cause the chair to simulate the motion of a rocking chair. The mechanical rocker/glider chairs were first manufactured in the United States and Canada during the 1930’s.

Our client in her late 80’s approached us to rejuvenate her rocker glider chair and we just loved her story. As a young child in the pre-war years she travelled from her home in Rugby England with her father by train to Edinburgh Scotland to visit her grandmother. Apparently her grandmother had very strict house rules however when she had the chance she would love to rock in her grandmother’s chair. A few years later after the passing of her grandmother her aunty asked if she would like any of her grandmother’s possessions with the obvious response, “the rocking chair”. Then some eighty years later we were given the task of reupholstering her special chair.

Our client had selected an olive cut pile cotton velvet for the upholstery which suited the chair and reflected the era. All the upholstery was removed from the chair then the timber frame was cleaned and polished. Jute webbing was fitted over the seat and then a hessian overlay and premium padding with a polyester overlay. After the outside back was fitted the same process as the seat occurred then the arms pads were built up with premium padding and polyester overlays. The inside back, seat and arm pads were then upholstered and unlike the original chair which was trimmed with gimp we used self-covered banding which was then space studded.

When the chair was delivered our client had tears of joy saying this was something she had wanted to do all her life.

The settees and ottomans arrived in good condition. They are excellent. Marnie and I indulged in their comfort last evening and agreed we owe you a vote of thanks for your craftsmanship. Thank you and well done.
Derrick and Marnie
Mt Barker
One word – STUNNING! Thank you very much, I shall sing your praises to all and sundry. I sat in it and I love it – I shall be reading a book whilst reclining on it this weekend. I am so glad I decided to go the way I did and re-cover rather than buy some Chinese junk.
Bev
Bayswater WA
I apologise for being so tardy in telling you how thrilled we are with the newly covered couch and the two arm chairs. They are perfect and we just love them. I have to keep the grandchildren off them when we visit the vineyard. Many thanks again.
Jane
Dalkeith WA